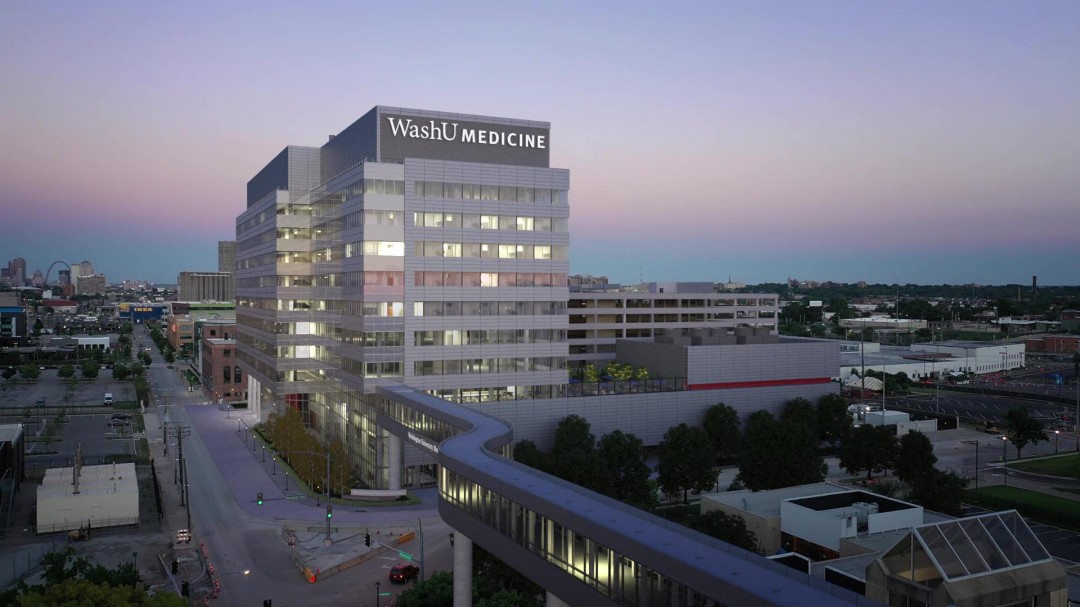 While we’ve been quiet here on our blog, we’ve been heads down in production; particularly on an arch-viz 3D film for Washington University School of Medicine Neuroscience Research building in St. Louis, MO. While the project officially broke ground back on March 6th, 2020, and is currently in full swing, we had begun production of our film to showcase this addition to Washington University’s campus.

We partnered with Perkins + Will and Cannon Design to realize this state-of-the-art, 600,000 square foot facility. TILTPIXEL was charged with creating a 3 minute long film that highlights and features all of the exterior and interior amenities among a high-tech science and research lab.

One of the greatest challenges in creating a seamless film that looks believable and convincing is fitting it into the context of the existing site. Most of the time, we can go on location and simply shoot backplates to camera match our 3D buildings into. When we had started the project, construction was already under way. So when we arrived the site looked like a war-zone with cones, cranes and cables all over the place which made it very challenging to photograph. There was not much recognizable from the existing campus. For some shots, to blend the existing buildings back seamlessly, we essentially modeled the entire surrounding site. This allowed full and complete control with lighting, camera placement and entourage. The on-location photo-shoot even in an unrecognizable construction site is still very useful as we can photograph existing surrounding buildings to use as reflection cards on our building so it fits onto campus much like it would in reality.

In this shot on the left, we had to paint out the crane from the drone shoot before matching our 3D building into the scene, otherwise it would show behind our new building. The surrounding streets needed to be replaced as well so the new building and existing campus blended cleanly. We also had to be thoughtful about the existing foreground tree and building. For those foreground objects we used a vfx trick by creating masks in 3D to match the drone footage, to allow these items to show over our 3D rendered frames.

For activating and bringing life to the spaces, we used a combination of 3D animated and greenscreen people. For the 3D people we also tested out AXYZ new 4D technology which has an extra level of realism in animation from traditional 3D models.

For the lab sequence, it was very important that the technology we featured in the film was accurate to the equipment that will be installed when construction is complete. It was equally important to show the equipment being used correctly. For cases like this, a greenscreen shoot is essential for getting the customization as well as the realism we needed. In this instance it involved lab coats, pipettes and equipment specific for neuroscience.

To get an accurate reading on placement of actors we used a program which allowed us to view a rough composite in realtime. While crude, the preview is was effective enough for us to direct the actors and change their position to match that of the 3D environment on the fly.

For the realtime compositing, OBS (Open Broadcast Software) which is more known for its streaming capabilities, was used to visualize the shoots. “We were able to use a tool that was intended for live streaming, but in a different context for our purposes”, Ramy Hanna explains. “This allows us to direct the actors in realtime to exactly where we need them to be, and gets us the shoot right the first time”.

Using all of these tools together, allowed the client to get a good sense of the film very early in production phase. In addition, what was a fairly ambitious film in length was produced in a very aggressive timeline with very minimal revisions and changes. Ultimately the end product is an effective marketing piece for the client that delivers a convincing and accurate depiction of the finished result, and we look forward to seeing the finished building!