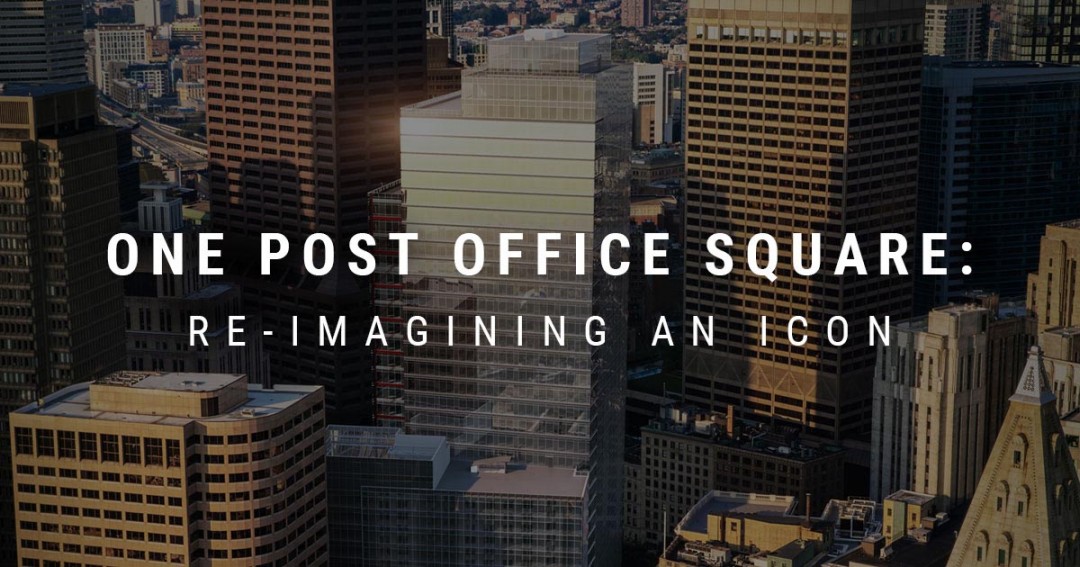 Being innovative isn’t about abandoning the past and building something new–it’s a mix of ingenuity, originality, and a lot of creativity.

Just like the new One Post Office Square. One of Boston’s most recognizable buildings is in the midst of a dramatic physical transformation, shedding its traditional skin for floor-to-ceiling glass and creating a host of new amenities including new public and outdoor spaces. This isn’t simply a story of a new glassy tower. It’s about re-use and re-invention, being smarter to create something better.

TILTPIXEL provided visualization services while our partners at LLM Design created a full marketing campaign, thus placing this iconic building once again firmly in the forefront of the Boston office market.

LLM Design and TILTPIXEL worked closely with JLL and Morgan Stanley to help define what this new One Post Office Square will be–not only through the design of a new visual identity, but also by developing the strategic positioning and messaging. The brand is all about transformation: dramatic change to elevate the modern workforce and raise the bar one notch higher. Several themes wound their way through the brand narrative, culminating in an overall message that that focuses on the symbolic shedding of the facade that will allow the new building to emerge from its historic roots.

The new One Post Office Square is optimized for the future while retaining the important social currency that can only be found at this address.

The Brand: A signature red cross-bracing will be a visible point of distinction for the building and was the design inspiration behind the brand identity created by LLM. It symbolizes not only the physical transformation, but also the bold, modern look and feel of the new building’s brand and the power of “One.” This visually strong brand element is carried throughout all marketing pieces including the website, interactive brochure, and broker e-blasts. Together with a sleek, minimal design and a very stylized set of images, the materials created work in concert to tell the new story of One Post Office Square and how it will elevate the modern workplace.

The Film: It was important that we also brought an emotional appeal to this powerful transformation, allowing audiences to connect to the building in a deeper way. LLM and TILTPIXEL developed a film concept that includes a shorter teaser film that will be followed up by a more traditional marketing film. The teaser focuses on a central character walking through Boston’s Financial District on an overcast, rainy day. Fog was used as a conduit to transition the scene from its current state to a transformed reality: a striking revitalization of the historic building.

The Visualization: With such a visually physical transformation happening for all of Boston to see, we also had to give potential tenants a way to imagine this new building in its finished state. TILTPIXEL developed a series of renderings to showcase the vibrancy of the tower’s restoration. The red cross bracing was vital to the teaser film and played a role in the renderings as a means of showcasing a bold and modern workplace. In addition, the film allows viewers to see themselves in the surrounding environment as they follow a woman walking through the neighborhood and witnessing the building’s transformation firsthand – and the exciting impact of One Post Office Square’s restoration on the neighboring community.

As creative partners, LLM and TILTPIXEL have a long history of collaboration and idea generation. The comprehensive campaign developed for One Post Office Square is a strong example of thought leadership in real estate marketing.

How can we do the same for your business? Let’s talk.
Connect with us to learn more >