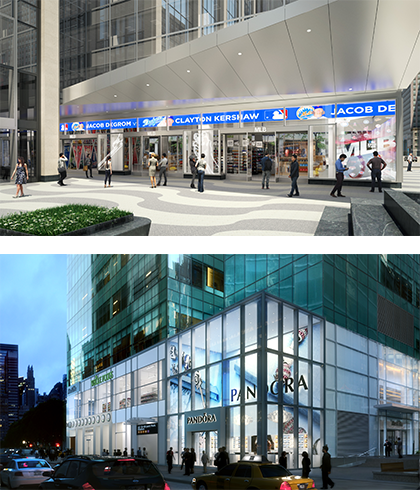 TILTPIXEL clients come in many forms: commercial developers, brokers, architects and business owners…anyone in need of visual communication tools for real estate. And at TILTPIXEL, the success of a client spells success for our studio. We are laser-focused on achieving your end goal. Whether it’s showcasing the appeal of a new mixed-use development or signing the lease of a high-end retail space, our clients’ wins become our own.

When Rockefeller Group secured Major League Baseball in one of the biggest New York office leases of the year (400,000 square feet at 1271 Avenue of the Americas), we applauded. Our renderings were a powerful depiction of the excitement that MLB’s street-level plaza and outdoor terrace would generate in Rockefeller Center. The lease-signing signaled success. We had played our role in visually communicating the benefits of a long-term partnership between a prestigious New York developer and the oldest professional sports league in the United States.

Similarly, we joined JLL in showcasing several key retail venues in Midtown Manhattan. Storefronts included Whole Foods, Tourneau, Pandora, Equinox and Asics at 1095 Avenue of the Americas, 125 West 41st and 120 West 42nd. All were leased, and TILTPIXEL was proud to have supported JLL’s marketing efforts.

In the heart of NoMa, a vibrant district in Washington D.C., we partnered with Skanska to portray Tyber Place. This fusion of flexible work space, multifamily

apartments, restaurant and retail is comprised of RESA, 44M and 88M, three developments tied by a meandering pedestrian walkway. Tyber Place is a showcase of sustainable construction and a prime example of mixed use development elevating a neighborhood. TILTPIXEL’s visualization enabled Skanska to display the rich, layered amenities offered by each of these unique, connected developments.

Just as each client has an end goal, TILTPIXEL’s deliverables serve as an important element of a cohesive marketing strategy. We enable our developers and brokers to excite, to educate and most importantly, to sell.

Meet with us at ICSC New York to plan your next project or to just learn more. Whether it’s visualizing a new mixed-use space in virtual reality or displaying tenant options for retail, TILTPIXEL artists deliver unparalleled quality and service to elevate marketing efforts in profound ways.